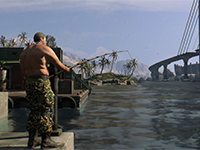 It's a new year and it is time for some new stuff for Dying Light. Well at least in a fun little way of New Year's resolutions and a bit of extra gameplay. We are now under a month from release of Dying Light so hopefully we are going to get something to add to the parkour zombie killing fun coming to our PS4, Xbox One, and PC. If we are to speculate on the following trailer we could be getting some simple little side games outside of the core.

If the above image and the following trailer are to be believed for Dying Light then are we going to get some fishing action in the mix? Probably not but it would be interesting to see it used like in other games. That being in requiring you to "fish" to salvage some cool items to add onto your weapons and gear. Doubtful but a fun idea especially in the world of a zombie apocalypse. I'm guessing it's all just in good fun.

I'll let you be the judge as to this new look at Dying Light though. Have a look at the trailer and then wish us all Good Night and Good Luck once we get into Dying Light on January 27th.