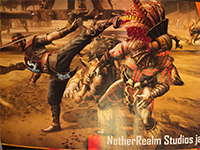 Just like the Kano "leak" for Mortal Kombat X it looks like print media has given us a look at Kung Lao before the official announcement from NetherRealm Studios and Warner Bros. may have wanted. This magazine being a Finnish gaming magazine, Pelaaja, and thus translated by a Mortal Kombat fan site for us all. Kung Lao isn't the only nice little tid bit of information that we are getting here though as It sounds like Ed Boon had a little bit more to say on how the social aspects of the game will play out. We'll dig into that in a little bit but let us start of with the man off the hour, Kung Lao.

Obviously it seems that Kung Lao has made it out of Mortal Kombat 9 and into Mortal Kombat X's story. There is no real explanation on that but I'm sure there will be. As well as the story as to how Kotal Kahn now rules Outworld. Obviously Kung Lao also has three different fighting styles like the rest of the cast and here is a quick break down. Details are so few and far from this translation it is going to feel a bit truncated so I apologize for that.

Most of the styles for Kung Lao sound pretty straight forward there. Nothing to shocking compared to what we've heard for Mortal Kombat X so far. The Hat Trick style is a bit interesting though as it sounds like Kung Lao can pull a sneaky trick at any time after he throws his hat. Even in the middle of a Kombo or a juggle. The ramifications here should be quite obvious and a nice little twist to the normal Kombat we should be looking forward to in Mortal Kombat X. I'll take it as it is at least something new being tried and we can't argue with that. Unless it is a terrible addition or over powered in some way.

Lastly, it sounds like Mortal Kombat X is going to have a more complex online set up that persists when you are offline in a way. When you spin up Mortal Kombat X you will choose between five different alliances: Lin Kuei, White Lotus, Brotherhood of Shadows, Special Force, or Black Dragon. Your team will gather "battle points" which drives some of the UI as well as other aspects that were not detailed. Even if you are a player who wants to keep to yourself or join in the online social thing you will have all of these options so there is no hiding out on it.

So there we have it. Another name for Mortal Kombat X in what still looks like a large roster. We are down to four months until the game's launch so I have a feeling we will get a bum-rush of updates now that we are so close. Hopefully some other new characters to the series or maybe a few of those guest stars that we've heard rumor about. I guess we'll have to wait and see.