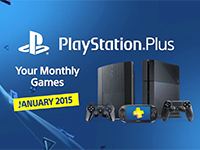 Just like that blasted Christmas week we are back to scraping the bottom of the barrel for news and here we have the free games for PlayStation Plus in 2015. The New Year's week is just as bad as ever for any hard hitting news and updates for the video game world. It sucks but at least you have us here to try and keep you informed as much as we can and this time it is for all of you playing the PS4, PS3, and PS Vita as long as Sony can keep the PSN up and running. But that is a whole different issue now.

Enough griping. Let's see what we have in store for PlayStation Plus as soon as the New Year begins. You can either site through the full trailer below or you can just take a quick look at all of those PlayStation Plus goodies in list form just a bit lower than where your eyes are looking at this point. Go ahead and look now.

PlayStation Plus Games For January

Not the best haul for PlayStation Plus to start with but it could be a lot worse. Having First Light in the mix kind of forces all of those PS4 players to have already played the Second Son by default. Seeing as that was a huge game when it released I guess it make sense but I feel bad for those who will be getting it for free and have no clue what is going on in the story. I guess they can all hop over and play some Duke Nukem on the Vita at the very least. Like I said, not the best but could be worse.

Are you excited to see what PlayStation Plus is going to bring us this year? Let us know in the comments below.