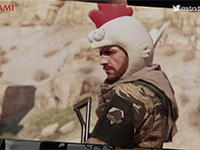 If you are a huge fan of Metal Gear Solid and looking forward to Metal Gear Solid V then you were probably one of those people who sat around with Hideo Kojima on Christmas day while he opened presents, talked films, and then trolled everyone looking for a release date for Metal Gear Solid V: The Phantom Pain. To be fair, you all should have been having a good time with your families instead of watching someone who's culture doesn't celebrate the holiday do what he does best. That would be giving you just a little bit of something new so you don't loathe him but not really give you a thing you really want. He's been at it for years so I'm surprised people keep falling for it.

Outside of it being yet another ridiculous addition to Metal Gear Solid V this new chicken hat has a few gameplay alterations that come along with it. Effectively, if you are struggling with Metal Gear Solid V, be it through dying too often or getting spotted, the game will prompt you with a question. That question being "Would you like to use a chicken cap? Yes or no?" If you take the plunge and say yes then you will don said hat for an undetermined amount of time even through cut-scenes. I say undetermined because I'd like to hope that you won't be forced to wear it the whole game if you are only having issue during one section of Metal Gear Solid V.

Why would you want to wear said hat though? Well, while you have it on all enemies react and spot you at a slower pace. It also does a few other things like glow in the dark and other silly things but the reaction time is the real benefit. Pretty much it is in there for those who are having a rough time with Metal Gear Solid V but still want to enjoy the full game and story. Kind of an aid to those who are not gaming experts but Konami doesn't want to alienate because of this fact. I know a few people who fall into that category myself and I see them honestly needing something like this to help progression.

Hopefully you find the addition of a chicken hat to Metal Gear Solid V a fun one. Also hopefully you found out about this from the few minutes of reading and not the hours of watching the video game troll master at work. Either way, we still do not have a release date for Metal Gear Solid V: The Phantom Pain. That will most likely be slipped to us at a much later date now.