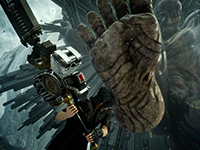 If reports are correct then the current state of the Final Fantasy XV will have it so only one of the party can call upon summons during battle. That character being Noctis and those reports coming out of an interview between Famitsu and game director Hajime Tabata. Of course this isn't too strange given the past of the Final Fantasy franchise as having only one character be able to summon isn't new. So there is not that when it comes to all things Final Fantasy XV when we look at the battle systems. I can't wait to see how they will look on the PS4 and Xbox One as I think they will truly impress there.

This of course is not the only bit of news about the battle system that has been reported on for Final Fantasy XV though. Even though it is all still in an early stage it sounds like aspects of Chrono Trigger and Super Mario RPG are being brought back for Final Fantasy XV in a new way. This would be in the way of party members being able to team up and perform extremely powerful attacks. Also it would require timed button presses to make sure they are triggered and linked together to boost said attacks. Other games have used these but it really is Square Enix who pioneered it for me and they were always things I wished to see come back. Wish granted for Final Fantasy XV…at least for now.

Lastly, before I officially let you off to look at the screenshots below, it looks like you MP gauge is going to handle more than just magic in Final Fantasy XV Of course this is also a work in progress so it may be changing but it looks like MP will also drive special moves, dodging, and evading attacks. That is about the extent of the explanation there but I think it makes a bit of sense. Granted they may not be magic moves/evades but it does stop there needing three gauges we need to keep track of even though it should be called something other than MP. Unless mana drives all in Final Fantasy XV.

Now that you've been nice and read all of my words, here are those Final Fantasy XV screenshots as promised. Some are lifted from the earlier trailer but some look to be on the new side. Either way it is something nice to look at for Final Fantasy XV.