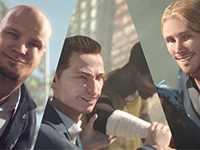 If you just can't wait until next year to see what Resident Evil Revelations 2 has to offer then do we have a new video for you. It looks like we have the opening cinematic for the first episode of Resident Evil Revelations 2 for you in full English. Apparently the Japanese version leaked earlier but now we have the other version that most of my readers will be able to understand. Unless you like using the poor Google Translate from English to whatever language you are trying to read this in right now. Enough about that though. Let's see how Terra doesn't always have to end with "orist."

Yes that is one of the marketing jokes used in the following video. Go ahead and spoil your Resident Evil Revelations 2 experience right now with the video though. I won't mind and neither will Capcom. Who really cares about the first four minutes of a game anyways? Especially one all about story over fancy visuals and gameplay mechanics…

Well that kind of puts the whole kidnapping of the two into a bit more perspective for Resident Evil Revelations 2. It also kind of explains why Barry would obviously need to be a DLC character to add on to the whole experience as well. I'm not sure what kind of context this puts us all in according to the grand events of the franchise but hopefully that will all be saved for us to play through and puzzle out as we aid these two through the misadventures they are going to get into. That kind of makes Resident Evil Revelations 2 sound like a slapstick comedy instead of a horror thing doesn't it? Well it's not so don't go there anymore.

I am glad to see this personally as it does build off what I've played so far for this episode of Resident Evil Revelations 2. The demo I've played kind of opened where I can now assume this left off. If only I would have seen this before I would have cared a bit more about letting the girls get ravaged by the infected here. Most likely not but I like to think it would have. Guess I'll never know now will I? Not until I get the full game I guess.