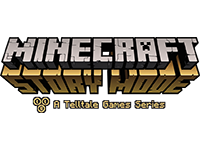 Hey look, just what all those Minecraft players want; a story mode. No? Well Telltale and Mojang are now officially working on Minecraft: Story Mode just for all of you out there who truly want some kind of story behind all of the mindless hours of tree punching. My whole experience with Minecraft should be obviously only based on what was shown on South Park so I have no clue if there is more to the game than that. All I know is that there is no Minecraft 2 announcement but a Minecraft: Story Mode announcement here.

If I have no real experience with Minecraft then why am I even talking about here? Well, I have a lot of experience with story driven games from Telltale and that is what this going to be. Not some add-on to the popular game or anything but a story that happens to use whatever Mojang has set up in the world of Minecraft. All of that and this will not even be an official story for Minecraft proper but just for Minecraft: Story Mode. Hopefully that makes sense. How about I just give you what you want? Here is everything that the two companies have released so far for Minecraft: Story Mode.

So there you have it. Kind of odd that Minecraft: Story Mode is slated for all platforms and not just an Xbox exclusive but I guess even though Microsoft owns the property they want to license it to gain as much money as they can. I'm not sure how Minecraft: Story Mode will do that as according to YouTube anyone can make a story based thing in Minecraft already but I guess we'll leave this to the pros. They have yet to fail all of us gamers so far. Only a small portion. We'll see if that continues into 2015 with yet another Telltale game to add into the mix.