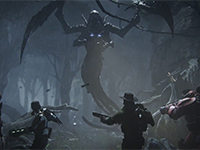 Merry Early X-mas to me and all of those Evolve fans out there as we have the third monster that we will be hunting down or hunting with this coming February. To quote Turtle Rock Studios on this, "She’s a space alien ninja Monster who warps around the battlefield, ripping into her enemies with her blade-claws. She can hit – then run – before you even see her coming." That's just the description though. The name and amazing look at the Wraith isn't the only fun bits we have for her.

I'll let you get acquainted with the trailer for the new monster so you can see how awesome she could look when playing in your matches of Evolve. It is a very Blizzard way of doing it here but I'll take it because even based on this The Wraith is already my favorite of the three monsters already shown.

Yes; The Wraith can teleport. She can spawn decoys and go invisible. She can abduct a hunter and drop them on the other side of the map if she so pleases. She can even spawn an arena of sorts to lock the hunters down while going hog wild ripping them to shreds with the scythe hand/arms. She's not the beefiest monster for Evolve to date but she is being claimed as the hardest to hit. Of course that makes sense when you are talking about space alien ninja monsters. Still trying to get use to that description myself.

Here's the full break down of what Evolve's Wraith has up her sleeve without my inane take on it all.

There we have it. All of the hunters and monsters for Evolve have been given a name and a face. Now is just the long wait until we get to play the game in February… Wait… This just in. It looks like the next beta for Evolve with all of the hunters and monsters will be playable for the Xbox One on January 15th. That is the full beta. For those who were part of the Big Alpha you should be getting an email hooking you up for this. All of the PS4 and PC fans of Evolve will also be getting an email to take place in the Technical Test on January 17th. So we all get in.