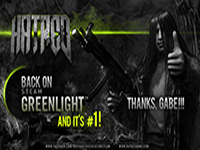 If reports are true it looks like Hatred is now back up on Steam Greenlight thanks to Gabe Newell… Or publicity stunt… Or shady practices by Destructive Creations… Or Korean hackers… Or hopefully you get the picture by now. None of that of course changes the fact that you can again vote for Hatred to be published on Steam now or try and crush the hopes of at least 27,000 hopeful gamers out there. You'll only need to muster another 23,000 negative votes to succeed there though.

You may be asking yourself how Gabe Newell could be the one bringing Hatred back up for the vote. Before we get into the rest of what is on my mind now about Hatred let me share with you the email that some are calling fake but the developer swears came straight from Mr. Newell's inbox.

As with most things on the internet there have been questions as to the authenticity of this email as it has only been shared by Destructive Creations and not Valve directly, but does it matter? First you would think that Valve and Mr. Newell might take issue with their names being used in such a way if it were not true but that still doesn't stop some from questioning if this was all some huge PR stunt to get even more people talking about Hatred to boost sales of the game. If so, good on them for using the human outrage to help promote a game about human outrage.

On top of all of that I've started to see people who were disgusted with the core concept of Hatred starting to sing different tunes. Almost like they are giving it the credit that was given to all of the other "murder-sim" games out there instead of just focusing on the negative for Hatred. So everyone is starting to think along the same lines as I have always been with Hatred? Just because it seems like gaming fans are getting behind the game now you are going to join the flow? You are no better than those click bait journalists who despised Hatred from the start to seem like they gave a fucking rat's ass about the morality of humanity.

To better hit the point, if so many people were disgusted by Hatred in the gaming community why are the current stats for the Greenlight on Steam looking like this? All this hatred over Hatred looks to be just like click bait yet again as it looks like gamers have voted and will vote again with their wallets once the game is complete. As for me I'll probably fall into the category of people who was behind Hatred from day one but will be drowned out by all of the other "paid journalists" as they will see it is the popular thing now and they wants to get paid to talk highly about a game…