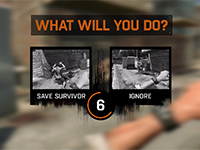 If you can't wait until January to play a mission for Dying Light then you are a bit in luck. While you will not be picking up a controller or controlling the main character directly, Techland and Warner Bros. are hooking us up with a cool interactive trailer to play through. We've seen these many times over in the past so it isn't anything new as far as marketing but it does let us choose our own adventure in Dying Light right now for one mission. Can't look a gift horse in the mouth there.

What is even cooler is that for those who have yet to lay on hands with Dying Light in person is that some of the options you get will let you run through parts of Harran you have yet to see. Look at me gabbing on when there is a new interactive trailer for you to dive into. Good luck with making it out alive in this new Dying Light trailer.

That was a bit fun now wasn't it? Hopefully you turned the annotations on for the video there and were not stuck just playing straight through this mission of Dying Light on autopilot. Granted I do wish we would have had more options at each gate but that is what Dying Light proper is for isn't it? If I had a real wish to have seen here it would have been the night time and the craziness we have to deal with when that happens in the game. None the less it looks like I'll be giving this a few more plays until January.

As of the writing of this I only went pure stealth in the Dying Light interactive trailer. What have you tried? Did you live? Did you die? Are you more excited for Dying Light now than ever? Let the universe know in the comments below.