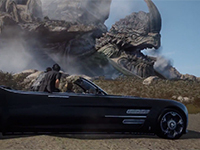 It only took about three months but there is finally an English version of the Final Fantasy XV trailer. Well more an English dubbed trailer so all of you Anime snobs can get ready to piss and moan. None the less Square Enix has given all of the fans of the franchise who don't speak Japanese a look at the trailer to put a few things into context for Final Fantasy XV. I'm glad I'm no snob and prefer my dubs as now I have words to place alongside the amazing looking title still in the works for the PS4 and Xbox One. Sorry to all of those fans out there who don't speak English or Japanese though. Not that you are getting anything more than a poor translation of this anyways right now…

Enough of all of that. Here is that glorious Final Fantasy XV trailer for more people to fully enjoy. Have a look.

If this video didn't come straight from Square Enix's YouTube account I'd swear someone was just doing their own take on the Final Fantasy XV as a goof. Some of that dialog is just a bit too odd or, sadly, fitting for what is going on in the scene. Read that as "someone narrating the events." Granted there are few things in there that does define the character roles in the footage so there is that. Not that we couldn't have gone to Wikipedia and read a lot of the synopsis already but it is nice to finally see and hear how Final Fantasy XV will be once it lands outside of Japan.

I've always been a huge fan of the franchise, even the Dress Sphere, and can't wait to get more for Final Fantasy XV. Now if only we had a good English dub for the 8 minutes of gameplay we also were able to see out of the Tokyo Game Show this year. Maybe next week but most likely next year. Either way I'd still say Final Fantasy XV looks to be off to a great start even though the dialog in the game seems way too off. Maybe it is all just out of context and such?