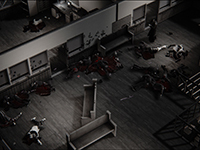 So this was going to originally be about Hatred being up on Steam Greenlight but as I began to wrap the final keystrokes it would seem that the game has been pulled down. Yes, Hatred was up for community vote on Steam's service to be published but, like I said, it was only there for a few hours before it was taken down for the voting and an official statement was released from Valve on the whole situation. I'll let you read all of that before I get into my own thoughts on what is going on with this "offensive" PC shooter game that Destructive Creations have been working on.

Here's exactly what Valve had to say about Hatred and why it was taken down from Greenlight.

I fully understand that Valve has no obligation at all to host Hatred at all. That is part of the user agreement when using Greenlight. I don't fault them at all. I do find it a bit interesting to note that based on the numbers that Hatred was receiving during the time it was active on the site placed it at #7 on Greenlight before all was said and done so this does feel more like a publisher not wanting to be associated with the game, like the engine developers, over a user base that doesn't want the game out there. Have a look for yourself to see the numbers Hatred had before being pulled. From my math there, and the handy pre-generated math from the graphic, it looks like on 7.5% of people who voted for Hatred didn't want the game to be up there. Usually the haters, pun intended, come out in droves before any of those who actually want to promote the positive side of things. It really does look like Hatred has the support most developers and publishers are looking for which is why it is odd that Valve wouldn't want a piece of the pie here. They already take pieces of the money pie for games like Manhunt, Postal, and Grand Theft Auto so it seems weird but hey, there are sharp people over there that are sure they know what they are doing.

Personally I am still wishing Destructive Creations good luck in bringing Hatred out. It is surely not going to be everyone's cup of tea given the backlash it's received so far but that doesn't mean that their game shouldn't be made. If that were the case all around then maybe NWA shouldn't have been allowed to record their music. Maybe torture porn feature films shouldn't be allowed to be made. Plain and simple here, if Hatred isn't hurting anyone or causing any real harm then maybe we should just let it be and prove with our wallets that you don't care for this kind of game. I know it won't be the definition of video games for me but I'm still down to give Hatred a good old play through.

Not to mention, all of this "negative" press is still getting people to talk about Hatred. Hells, you've read the game's name 19 times already and that is usually one the big steps in subliminal marketing. Don't let the Illuminati know that I know…you know.