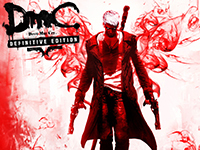 Looks like fans of DmC: Devil May Cry may be getting what they have been asking for over the past two years. Ninja Theory and Capcom have just announced the DmC Devil May Cry: Definitive Edition coming on March 17th 2015 for the PS4 and Xbox One. Just like other "Definitive Editions" it looks like we are getting the game fully re-mastered for 1080p resolution and 60 FPS. Not to mention the standard fare of all the DLC released up until now as is also the usual case to better explain why this is the version of the game you need to purchase. Ninja Theory does need some money coming in while they work on Hellblade after all.

Of course there is a whole lot more to the DmC Devil May Cry: Definitive Edition than just what was mentioned above. There happens to be a whole host of new modes and additions added into to better explain off that $39.99 USD purchase. For those curious, here is everything you will be getting on top of the core game that was brought to us before on the "last gen" consoles and PC.

I guess I'm not that hardcore of a fan but outside of being able to replay DmC on my new consoles the rest of the list here isn't all that selling for me. I'm not saying that DmC Devil May Cry: Definitive Edition is a dud by any means; I'm saying that just the graphical upgrades and the PS4/XB1 options would be seller enough for me. I'll most likely not even touch the rest because unlike other fans I am not that much of a masochist and I love my controllers. I don't want to be hurling them around because Ninja Theory and Capcom wanted to give me Tourette's and ungodly rage. Then again, you are not me so you may want this in your new DmC.

On top of the DmC Devil May Cry: Definitive Edition Capcom also announced that we will also be seeing a Devil May Cry 4: Special Edition on the PS4 and Xbox One the summer of 2015. What that will include will most likely be announced in the coming months. I am pretty sure we can expect the normal fare of PS4/XB1 expected graphics updates as well as DLC stuff. As that comes down the pipe you can expect to hear about here on the site. Until then we at least have the DmC Devil May Cry: Definitive Edition to burn a hole in our virtual wallets. Or physical ones if you are a Grandpa…