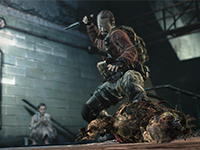 Well it is official now. We have a release date for Resident Evil Revelations 2's first episode still only titled Episode One for now. It looks just like with the Telltale games the episode will be hitting NA PS4s and PS3s before being released to the EU systems, Xbox Ones, Xbox 360s, and Steam accounts a day later. While we have a table below showing you the full list of launch dates for Resident Evil Revelations 2's episodes for those with two second attention spans you can dive into the first episode on February 17th/18th of 2015. Granted that does depend on the platform of your choosing.

For those of us still with us, here are all of the release dates for Resident Evil Revelations 2 digitally with the full retail box set being available the same day as the final episode. In case you want to hold out until then the retail version will add Wesker to the Raid modes as well as a Throwback stage for said mode. Also alternate costumes for the four announced characters in the mix.

Yes, I did say four characters in the mix as this Resident Evil Revelations 2 news doesn't cover just the release dates but the fact that we are getting Barry, Moira's dad and lovable character from the franchise past, into the mix. He will have his own companion in the way of Natalia Korda. Don't scour the Resident Evil wikis for information on that character if the name doesn't ring a bell. She is a new character just for Resident Evil Revelations 2 who is along for the ride to aid Barry with her super powers of sensing enemies and hidden objects throughout the game's world. Yay for super powers…

But wait; there is more for Resident Evil Revelations 2 to go. With the release date and the announcement of Barry Burton in the mix we also have two new enemies and a new trailer for the game. The trailer can be seen below while the enemies are named The Rotten and The Revenant. The Rotten being new infected that have worked their bones out of their bodies to fashion some great weapons to kill you with. The Revenant are an amalgamation of other bodies sewn together to make a new horror to kill everyone who happens to set foot on the prison island that Resident Evil Revelations 2 happens to be set on. Fun times indeed.

From the trailer here it does look like Barry is a bit behind on the rescuing of Moira in Resident Evil Revelations 2. At least if you take that away from the cool fade that was done where Barry is walking through a demolished area that we've seen umpteen times in trailers past for the game. Maybe his two spin-off episodes are just him making heads and tails of where Moira and Claire truly end up in the story. Or worse… I guess we'll all see when Resident Evil Revelations 2 comes out next year. Until then, let the speculation fly!