The Bartlet Jones Supernatural Detective Agency Has Something For The PlayStation Experience
by David 'Hades' Becker [ Friday, 28th of November 2014 - 06:00 PM ] 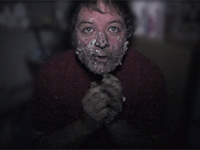 If you haven't heard of The Bartlet Jones Supernatural Detective Agency studio yet then you are missing out on a few things. This would be the studio founded by Nick Kononelos and David Jaffe out in San Diego. We're not going to go into a history lesson on how that all came about but you can check that all out over at the official website for the studio. The rest to follow is about what the team over there has cooked up for us all and when we might get to see something from them.

In a recent video clip to promote the PlayStation Experience the company's logo popped up after a mix of flashes and blurring images. One of those images displayed a link leading people to the Bartlet Jones website with a little something extra. You can see all that at the 18 second mark in the following video.

Did you catch it? If not, don't worry it flashed for only a few seconds, was upside down, and kind of blurry as well. Luckily some of us have too much extra time on our hands and were able to decipher what the URL actually was. Spoiler for those who wanted to find out on their own but the link was bartletjones.com/haunted. Following said link takes you to a page that has the following weird and cryptic video.

I know what flew through my mind as well as many others around the web when they saw that video clip "Looks like Bartlet Jones is working on a horror title." It is easy to see how that could come about as there are many shots of the studio itself as well as Mr. Jaffe eating cake like a lunatic in a dark basement looking setting. Even the company name kind of points in that direction. Speculation, as it always does though became too rampant and we were then treated with another little tidbit on what Bartlet Jones is working which is not a horror title in the end.

Those expecting a horror game from us (much as we'd love to make one 1 day) will be disappointed. Plus I'd hate 2 go against the amazing PT!

What could we be seeing for Bartlet Jones' first title then? Will it be a PlayStation exclusive or are they using the PSX as a way to make a grand announcement and keeping whatever project they are working on open for all? Who knows but the minds over there for now? All I know is that I am excited to see what they have to bring us given all of their past works. I also hope there is something substantial for us all at the PSX as well but I'll take whatever we can get. I have been a fanboy of almost all of Jaffe's work to date so I may be a bit bias for now.