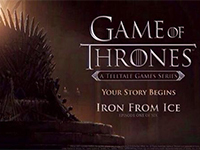 Crack open the wine and get ready for the first episode of Telltale's Game Of Thrones title to be released. Some of us have yet to even start munching on American Thanksgiving meals yet and we already have plenty to be thankful for now. Just as I assumed last week we are seeing Iron From Ice for Game Of Thrones during the first week of December. Unlike Tales From The Borderlands it looks like a global release will not be broken up more than we have seen in the past titles and episodes that Telltale puts out for their games.

Just so you are completely in the know, here are those release dates for Game Of Thrones — Iron From Ice. Unfortunately we may need to wait a bit longer for those Android devices but damn near everyone else will have it.

I know you may be thinking "where was our release trailer for this episode?" Well rest assured Game Of Thrones fans. It looks like that will be coming on December 1st. That would be on the Monday before we all get to start seeing Game Of Thrones popping up on our friend's recently played games list. Of course we will have that trailer on the site here when it does come live for us all to enjoy like the previously mentioned wine.

You may all go back to your gorging yourself on your food or mocking all of us Americans while waiting for Game Of Thrones to finally come out. You know you all do it…