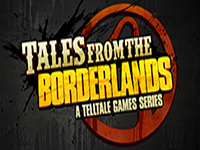 The first episode and debut of Tales From The Borderlands is now here. This has been one of those most talked about titles and fans of the Borderlands franchise have been questioning its worth since the first announcement about a year ago. This is a huge franchise with a lot of rabid fans so Telltale had their work cut out to make Gearbox's franchise prosper in a non-FPS way. Did they hit the nail on the head or is this just another QTE sit and watch a predictable plot. Here's what I have to say about Tales From The Borderlands' first episode Zer0 Sum.

It's been some time now since the events of Borderlands 2 and Hyperion is still up to their good old business. Enter in Rhys, the next up and comer for the company who gets screwed out of that status by a craftier member of Hyperion. This causes Rhys and his close friends to hatch a plan to screw this guy over and they venture off to Pandora to purchase a vault key that was slated for that guy. As it usually does, shit hits the fan and Rhys crosses paths with the other main character for Tales From The Borderlands Fiona; who also has her own crew of friends. More shit hitting the fan blades and the two groups need to team up to try and get their lives back to where they were only a day ago. Then more fan blades covered in shit as is the Pandora way.

This is going to sound weird but as it bugged me and caused issues during my play through of Tales From The Borderlands here but some of the action sequences really distracted from the actual gameplay mechanics. Some of the scenes that were playing out were so intense and amazing to see it boggles my mind that Telltale would want you not to focus on the events and keep an eye out for the QTE trigger. This led to many deaths in Tales From The Borderlands for me. In fact some of the events kind of blended into the action that you almost had to ignore the animations going on to keep an eye out for them. This just made no sense to include into the game. It would have worked if they were little extra bonuses for catching them but for the most part missing them led to a Game Over screen. I just wanted to see the awesome scene and I am penalized.

In all honesty that is the only issue I seemed to find when playing through Zer0 Sum here. Well outside of having to wait for the next episode of Tales From The Borderlands become available. The game was so much fun that I am hating the structure for release that Telltale has set up. I don't know if playing this episode for a fourth time is going to sate me until the second episode comes out. Hate it!

By the gods Telltale has hit the head of the nail so squarely with Tales From The Borderlands so far. While on the surface the gameplay for Tales From The Borderlands doesn't seem to deviate from the basics we have come to know with a Telltale title they managed to make it fell new and fun. Even when some of your choices don't really mater even though they do change some of the overall story. It's hard to explain that without spoiling bits of Zer0 Sum but in general the whole story thus far has been Rhys and Fiona retelling the events that have brought them to where they are at the beginning of Tales From The Borderlands. So you can say one thing with Rhys, which you get to see play out, only to have Fiona pipe up and correct the story so it flows back on course. This goes the other way as well.

Speaking to that, having two characters in Tales From The Borderlands has worked out much nicer than I expected it to. In fact it is the aspect that has made the story in the first episode feel unpredictable. This has always been my biggest gripe in the past few titles they have put out. Since you get to play two sides of the same story here you are subtlety playing against yourself so if things go awry you kind of only have yourself to blame. This even extends out to some of the odd behaviors that some of the NPCs have. Again not trying to spoil the story, but there is a very erratic NPC you run into with Rhys and her actions seem to make no sense. Then when you play the other side of the story you see how you, as Fiona, kind of set that up on purpose or accident. Like I said it is hard to explain without getting too spoilery. Just know that the writing for Tales From The Borderlands has blown away most of what Telltale has put out to date.

Lastly, it feels like with Tales From The Borderlands Telltale has perfected the QTE and action events; even though some blended in to the action. Just like all of the action in Borderlands we get a high paced feel in Tales From The Borderlands even though it is more or less a choose your own adventure story title. Even when in the depths of the death race in Zer0 Sum when you really just press a few buttons and move the control sticks a bit, the way they are blended in gives you that feeling of a fast paced FPS title. Then when you add in the fact that each character has their own little extra mechanics in general it really feels like the custom Borderlands experience that we were all hoping we would be getting here.

I'm not going to sugar coat it or gild the lily here. You really should pick up Tales From The Borderlands if you can. Yes it sucks that we have to wait for each new episode to slowly come out and I kind of wish we could play from start to finish right now but Zer0 Sum shows off that purchasing a Season Pass for Tales From The Borderlands and waiting is going to be worth it. If you are a cautious gamer though I still say pick up at least the first episode here. Borderlands has never been my favorite game franchise out there but with the story that Telltale is giving us here I can see it becoming one as long as I can get past the game mechanics I don't like. But that is the main Borderlands franchise and not Tales From The Borderlands. When something can make you feel bad for a Loaderbot you know you need to get it now!