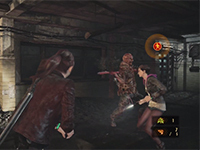 Slowly but surely we are going to see all of the game mechanics for Resident Evil Revelations 2 through short little clips. In fact two more little clips have cropped up here from the Resident Evil YouTube account that show off how the "buddy cop" thing is going to work out for you. Well at least in the regards of making sure Moira and Claire don't die and how they can help each other to explore and stay alive from all of the Afflicted in Resident Evil Revelations 2. At least there is one thing that they seem to be not making and that is another escort game where your partner is pretty much useless when not directly controlling them.

Here we have the first bit that shows us how to save, help, and heal each other in Resident Evil Revelations 2. It does look like you are going to be the one who has to be in direct control most of the time with the healing and helping but at least it looks like Moira can hold her own in the mix. At least until you have to run over and help her back up. Although since there is no "game over" in Resident Evil Revelations 2 when Moira goes down, according to reports, why even worry about helping her up and all that? That aspect should mean she is capable in general.

Here we have a look at how Moira can team up and help directly in Resident Evil Revelations 2. Or vice versa if you would rather leave Claire running around on her own. This is where the "escort" thing looks to be set aside as in the gameplay it looks like Moira will try and blind enemies for you to shoot without you needing to micromanage. At least to the extent where you just need to point and she will do it without convoluted command structures. Of course this makes sense because who would want to be the chick shining a light in everyone's eyes just for fun instead of the ones that need the blinding.

I am pretty sure these are not going to be the last little bits that we get for Resident Evil Revelations 2. It is slated to be playable at the PlayStation Experience so I am sure we will get a better understanding of where Resident Evil Revelations 2 is and how it will handle when the first episode lands next year. I know I am interested in trying to get hands on with it so do keep an eye here for a full update when I do.