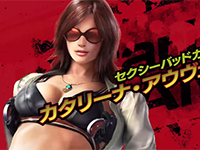 If you've been waiting for Namco Bandai to give us updates for Tekken 7 you can stop waiting for a bit. We have some new gameplay footage, new characters, and some new mechanics for the franchise. Unfortunately all of the dialog explaining everything is in Japanese so if you don't speak the language you will need to continue reading my drivel to get what you are seeing here. Although even that is kind of second hand knowledge from someone else's translations.

So first we have a good gameplay look at Tekken 7 new characters Claudio Serafino and Katarina Alves. As far as who they are and why they are in the mix here is still up to debate. As of right now what you see is what you get for both of them but at least all of your fans of "sexy bad girls" can rest assured that Tekken 7 will have one more added in to pine and gawk at while kicking someone in the face.

Next up is what is called Power Clash. From the sounds of it, it is a mechanic that lets you take a hit but not get pushed back. The benefit there is that you are still completely in rage to try and counter attack who ever just hit you. I'm not sure how that is going to be completely beneficial in Tekken 7 but it is a mechanic that is going to be included in for all those people who think getting knocked back when hit is a bad thing.

Lastly, it looks like Rage Arts are still making a comeback here in Tekken 7. This is the mechanic that gives players a chance for a comeback when their life gets to a dangerously low level. They then can unleash a crazy hit/combo that should hopefully save the day for you; if you are the one losing the match that is.

That about wraps it up for what you are about to see for Tekken 7 now. Like I said, that is if you don't speak or read Japanese. Those people may be able to glean more out of this new footage for Tekken 7 I guess.