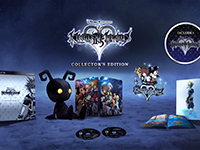 Here, have a look at what you will be getting in the Kingdom Hearts HD 2.5 ReMIX collector's edition.

No you didn't misread or see a thing here. Both Kingdom Hearts HD 2.5 ReMIX and Kingdom Hearts HD 1.5 ReMIX will be included for a price cheaper than both would cost separately. That is the entire Kingdom Hearts franchise in one nice place to get you all ready for Kingdom Hearts III. Then you add in all the fun stuff on top of that and $100 USD feels like you are robbing Square Enix more than dropping too much money. I know I wasn't expecting this kind of thing until right before the next major installment of Kingdom Hearts. I won't complain at all though as this is at least six solid games for the price of one and a half.

As a word to the wise though this edition of Kingdom Hearts HD 2.5 ReMIX is only available directly from Square Enix's online store for pre-order. There are limited quantities of it being made available so you might want to get on over there and secure yours before December or they run out. Such an amazing deal.