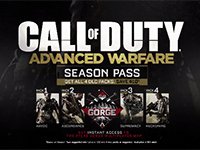 If you are all square for Call Of Duty: Advanced Warfare to launch next week then you most likely will be getting the season pass that will be coming along with the game so you don't miss out on any of the DLC that is already planned. You may not be well versed in what that season pass will entail for you as you move into the multiplayer of the game. If you have no clue then you can sit back and watch the most recent trailer for Call Of Duty: Advanced Warfare as it highlights quite a bit of what that DLC will be to expand your experience no matter the platform you are playing on.

What the hell is with all of the bunny hopping in Call Of Duty: Advanced Warfare all of a sudden? That is like the only thing I can seem to focus on here as everyone looks to be not only jumping all the time but super jumping around this map. That will get abused too much too quick and it looks like Activision is okay with just that based on this trailer. As long as it doesn't plague the campaign mode it won't bug me too much but I see it bringing down the Call Of Duty franchise quicker than people are claiming it already is.

Also, we have to wait until January for the first part of the Call Of Duty: Advanced Warfare DLC? What the crap is this? Outside of letting all those kids who are getting the game for Christmas have a chance to play the core game before the DLC hits I don't get the delay. Will we all still be that interested in Call Of Duty: Advanced Warfare months later to spin the disc or digital version back up? Maybe it is all a multiplayer thing I don't get…