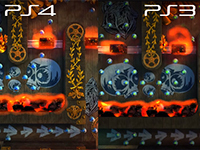 LittleBigPlanet 3 is coming out for both the PS3 and PS4. This we should already know from the announcement of the game back at E3 and all the promo videos, gameplay, and all that jazz up until know. You've been under a rock if you missed all that. The big thing that hasn't really been shown off though is how different each version of the game is going to look or if Sumo Digital took their time to make the game equal all around.

Here it comes though… until now…

It looks like someone who is part of the LittleBigPlanet 3 beta had a chance to record a bit of video from each version of LittleBigPlanet 3 and placed them side by side to help us all figure out if we are going PS4 for LittleBigPlanet 3 will the good old PS3 run the game well enough to get a pass. None the less though, here is said video for you to see.

Pretty much outside of a few particle effects and character close up shots both versions of LittleBigPlanet 3 look the same if you ask me. Obviously the PS4 version of the game looks a bit better but it isn't leaps and bounds like other titles as of late. LittleBigPlanet 3 wasn't going for a console seller kind of title so it makes sense that the developers made it all the same no matter how you choose to play LittleBigPlanet 3. Good news for all who are still holding out for a PS4 price drop before they upgrade. If only more developers would try to do this.

So I guess we can all rest assured that LittleBigPlanet 3 will be a nice looking and fun game no matter where we are in the console generation.