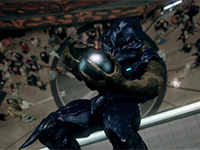 It looks like we finally have our first good look at Halo: Nightfall which is still slated to release on November 11th. This new trailer also comes alongside the announcement of HaloFest which will be a livestreamed event from November 8th until the release date for Halo: Nightfall. All of you Halo fans just died and went to whatever respectful paradise you believe in huh? Did you? Crap that isn't a way to keep an audience now is it?

For all of those still with us here let's move on to the topic at hand. That being the new Halo: Nightfall trailer and not all the madness that Microsoft has planned for the franchise. First have a look at the trailer and then we can better discuss what we just saw for Halo: Nightfall. Go to it!

If I didn't know better I'd swear that Halo: Nightfall looks like a high-end YouTube fan video more than a show. That is not to say that it looks bad but some of the post-production effects look more like a hobbyist constructed them and not a high-end production company. Maybe it is just me but that sword swipe definitely looked a bit to robotic to be a fluid being trying to kill the commander here. I may be a bit too critical here though as I am not a die-hard fan of the Halo franchise. Although I will say it looks much better than those krappy Mortal Kombat and Street Fighter shows. (See what I did there?)

Since I know that Halo: The Master Chief Collection is already being pre-ordered and pined for by so many already I have no fear that Halo: Nightfall will succeed a bit. This is a franchise filled with enough rabid fans that as long as the logo or any part of Master Chief is slapped on something it will do well. Just like Destiny and having MC's crotch as the game logo. Think about that…