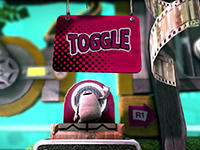 To be honest I think we all got to meet this new character for LittleBigPlanet 3 back at E3. At least to some extent but for some that may not be enough. Seeing as Sumo Digital and Sony PlayStation have taken their time to get intricate with Toggle for the PS3 and PS4 release of LittleBigPlanet 3 it makes sense that they would want us to know he is more than just a ne character that can get big and small on command. Toggle is more than just a cog in the puzzle machine and has a personality full of all kinds of things.

These personality traits for Toggle have been recently detailed on the UK PlayStation Blog and brought over here for your reading pleasure. Like would you figure that Toggle like's the ballet or that Toggle's proudest moment was completing the No Drain, No Gain level in LittleBigPlanet 3? Most likely not as the first is most likely a footnote in the game design document for LittleBigPlanet 3 and the latter can't be gauged as LittleBigPlanet 3 doesn't release until November 18th here in the States. I guess it is good that this nice list was put out for us to get to know Toggle a bit more.

Here's the full list for you to read and understand what makes this new character for LittleBigPlanet 3 tick. Also, we have a few new screen shots and looks at Toggle for those who don't care about how this little bugger works and feels on the inside. He has feelings no? We should also be on the lookout for more descriptions like this as we have two other new characters for LittleBigPlanet 3 to get to know before the launch date. We'll update as we find them.