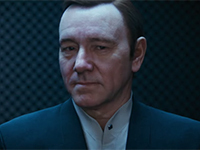 The time of Call Of Duty: Advanced Warfare is almost upon us right? Just about two weeks now is almost upon us. That is what we will go with as Activision and Sledgehammer games have given us the awesome looking launch trailer for Call Of Duty: Advanced Warfare filled with new footage of the game and more pushes to pre-order to get that Day Zero edition of the game. I just wish I could tell what platform this new trailer was captured on because it is hard to tell if it is PS3, PS4, Xbox 360, Xbox One, or PC. It's not supposed to matter given the upgrade availability but inquiring minds and all.

Let us have a nice look at what to expect for Call Of Duty: Advanced Warfare that we may not have expected just yet. Just in case you thought there may be something shocking to get spoiled here…

See what I mean on wanting to know what platform all of this was caught on? In one of the scenes here Kevin Spacey looks like a horrid flat blob of a poor Kevin Spacey look-a-like. Then you have the other scene, which we used for the main image above, where you would swear Mr. Spacey was doing a live ad for Call Of Duty: Advanced Warfare and not rendered in game. That translates over to all the other characters and environments here too. It seems a bit off-putting as either the person cutting the trailers is splicing scenes from different plat forms or Advanced Warfare just can't keep everything running smoothly all the time on one platform.

If I had to place me money I would bet on the prior and assume that the amazing visuals are off a high end PC build and the others on the 'last-gen' consoles. Granted I am hoping that the PS4 and Xbox One were used for the awe inspiring visual part but since I don't know for sure I'll go with the safe bet there. As long as the visuals of Call Of Duty: Advanced Warfare are not too jarring though I think the main success here will still be based on gameplay and multiplayer over all of that though. Something I feel Destiny missed the mark on but that was a whole different team.

We'll all find out on November 4th though as Call Of Duty: Advanced Warfare launches on all those above mentioned platforms. Here's hoping that we see another record breaking title on our hands.