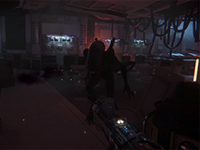 The reviews for Alien Isolation are starting to pour in and your last chance to pre-order what looks to be an amazing title is running out. Just like Amanda's life in the most recent and final video in the "How Not To Play" Alien Isolation video series to prep us all for the game's release on October 7th. That is when we will really see if Sega and Creative Assembly have been able to make up for the franchise's failing in the past. That is starting to sound like a broken record so let's just move on.

In this latest video for Alien Isolation here titled "Last Chance" we get to see what happens when we make so many poor choices while trying to escape the Nostromos that we only have an option to face a burning android or try to use a flamethrower on the titular Alien in an attempt to survive and make it to the next section. Obviously this doesn't end well for the player as these videos haven't been about how to survive at all and just have been montages of character deaths. Fun and entertaining but really needed another name for the campaign.

I'll leave you to it now. Here is the final of the multiple weekly updates for this Alien Isolation marketing campaign. Now all we have to look forward to is the actual game and all of the reviews to keep pouring in. Don't forget that you are coming up to your last chances to pre-order if everything you've seen up until now for Alien Isolation has you excited to give the franchise one more chance.