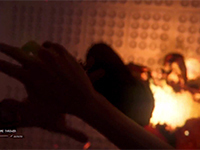 Well it looks like things have just gone from bad to worse in the Alien Isolation "how not to play the game series" as now we are seeing blatant things most of gamers would never do in a game. At least if you watch the latest two videos from Creative Assembly and Sega just on that. We have one where Amanda chooses to use a flare to distract the Alien but then stupidly runs over an active android for a tag-teamed death. Then if things couldn't get dumber on the player's end they set an android on fire and then watch as it walks closer to stomp the life out of Amanda. Maybe they should just move over to a many faces of death in Alien Isolation campaign instead of how to survive?

These have been fun little videos but I'm not seeing the how to survive aspect coming out as of late. Granted I understand that they team doesn't want to tell everyone how to beat Alien Isolation with ease as it would defeat the purpose of the game but why are we not seeing cool little walk-throughs or tips and tricks like we have for other titles, say The Evil Within? That would grab just as much attention to Alien Isolation as they currently are as well as give us all a nice little look at the game coming out next week (10/7). I'm also not a marketing person and just want to see more of the gameplay of Alien Isolation not just the kill screens though.

None the less we are so close to having Alien Isolation at home soon so I guess beggars can't be choosers at this point. So far everything shown looks to be making the franchise move away from the horrid pit fall it fell into with the last title. I don't know how many times I can repeat that but it seems like a broken record now; so I'll stop and let you enjoy the latest two videos for Alien Isolation.