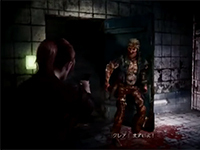 Just like Final Fantasy XV it looks like Resident Evil Revelations 2 is getting the trailer and then the gameplay treatment from the TGS. Here is where the gameplay comes in with what looks like the PS3 driving the game during a nice long demo for the game. At least I am assuming the PS3 as it is using the controls that are not on the Xbox One or Xbox 360 and the visuals don't look crisp enough to be the PS4 running. Then again this could all be the video quality that was spread over the net.

None the less, we have about 17 minutes of gameplay for Resident Evil Revelations 2 and it truly looks like Capcom is trying to bring the horror back into the franchise here. That was a stated goal after all. If you have a look at the following video you can see what I am talking about. The commentary may be in Japanese but the gameplay is in English for all those readers who are not multilingual out there.

I really do hope that this is an alpha build for Resident Evil Revelations 2 on the PS3 after seeing this. Things look very un-polished here and then there is the weird 'teleportation' that happens when progressing through the level. While it would work well to have Moira just pop next to you when you open a door in terms of beating the game it defeats some of the survival and horror that we should be looking for in Resident Evil Revelations 2. They were being chased by three Afflicted at one point and then poof; all is well because a new door was reached.

I also find it kind of odd, and hope it is explained, why Moira has an aversion to guns. Barry was the gun expert in the Resident Evil past so why would his progeny be so anti guns. Unless of course Barry did something messed up when she was young or something. Not likely but hey, hopefully it isn't just passed off during Resident Evil Revelations 2 to make sure that we have someone on flashlight duty the whole game.

Speaking on that, I get that we are getting co-op in Resident Evil Revelations 2 and that when we don't have a friend to play Moira we can swap between the two but who is really going to want to be the one shining the light and running all the time? For that matter why can Claire not see the 'shiny' stuff on her own? This seems like a reason to force the co-op more than have it be an option. Claire could have easily spotted the Key in the following demo but she needed to have Moira do it so she could shoot them down. Just seems like an odd thing to have forced in. Maybe it will pay off?