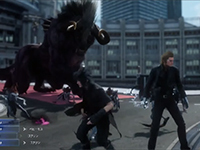 If you were worried after the long wait for the Final Fantasy XV trailer that we would have another long wait until we received more updates on the game then you can rest a little. We have some new gameplay footage from Final Fantasy XV fresh from the TGS as well as a few tidbits of information on the game's mechanics. That and the news that EVERYTHING we've seen so far, sans the flying spaceships in the trailer, is 100% in engine footage. The spaceships were pre-rendered and that was it. Now that is damn impressive.

Moving on from all the visuals for Final Fantasy XV now.

Once you take your eyes just a bit lower down the screen you will be treated with a bit more of actual gameplay for Final Fantasy XV. It may seem like they are just showing off the characters for the game at first but the last third of the video shows off some of the new combat that we will have to learn to master Final Fantasy XV. From the looks of it, it is a bit more fluid like the combat that has been used in Kingdom Hearts or Parasite Eve in game's past. Directly from the game's director:

While it isn't touched upon in the following footage of Final Fantasy XV, there was also a tidbit on the open world feel that the trailer kind of implied. Rest assured Final Fantasy fans out there, Final Fantasy XV will not be an open world and thus deviating from the tradition feel of storytelling the franchise is known for. It sounds like it is more of an illusion to make the world feel more real while you take the epic journey along with the protagonists of Final Fantasy XV. That is good news if I do say so myself. I wouldn't want FFXV to feel like and MMO more than a standalone title.

Now that you have some of the new details, I'll leave you to the new footage for Final Fantasy XV. Hopefully the statement that the hour to four hour demo of Final Fantasy XV will still be included in Final Fantasy Type-0 this coming March. Only time will tell there though.