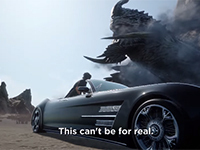 It's been tease after tease for Final Fantasy XV and now it looks like we finally are getting what we want. A new trailer for Final Fantasy XV has been released from Square Enix at this year's Tokyo Game Show and it looks just as we would expect it to; orgasmic. While there still is no word on when we will be seeing the game on our PS4s or Xbox Ones there is quite a bit of what can be assumed as in game footage throughout the entire two and a half minute trailer for the game.

I know you no longer care to read the words here so have a look at the trailer and I'll continue on about Final Fantasy XV after you've had a good look.

Mind blowing would be an understatement in regards to how Final Fantasy XV looks would it not? The visuals look to be exactly where we would be expecting them from Square Enix whom has a history of pushing hardware to the limits with their games. In fact I could have sworn I have personally driven down some of those roads here in the real world when watching as the characters cruised for monsters to kill in this trailer. I wouldn't be surprised if Square used the roads here as a point of reference.

Just as with the previous Final Fantasy titles, it looks like Final Fantasy XV is taking the action oriented approach again with the game's combat. It could be how everything was shot but I don't remember seeing much in the way of menu trees during the combat footage. Are we finally moving into a solid Kingdom Hearts style for Final Fantasy XV? It could be but I also remember early Final Fantasy XIII trailers doing just the same thing. I guess we'll have to wait and see.

There is no denying that there is some great work going on here for Final Fantasy XV and so far it looks like the long wait for the game after being changed from Final Fantasy Versus XIII will have paid off. I totally see another time-sink for me in the future here.