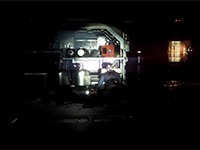 In the past weeks we've been treated with fun looks at how NOT to play Alien Isolation trough Sega and Creative Assembly's 'How Will You Survive' campaign. We've seen why going guns-a-blazing is a bad idea, why we shouldn't hide in air vents, and also just running from the problem will not help you survive Alien Isolation. It turns out that these are not just clever little videos to help promote the game but they could also be mixed into the Survivor Mode that has been seen at conventions since E3 this year.

Okay, that may all be a bit of a stretch to try and link everything here back into this Alien Isolation topic but hear me out.

If you direct your eyes a bit lower you will see a developer diary of sorts where the team at Creative Assembly talks about how Survivor Mode for Alien Isolation came about as well as few of the ins and outs of the mode. Spoiler! It all began with the dev. team challenging each other to play Alien Isolation levels in very specific ways with challenges mixed in. This could be as basic as sneaking through the whole level without the radar or it could be running through and shooting everything that moves with everything else in between.

In our case here these challenges on the developer level have been boiled down and added into Alien Isolation for us to play and compete on leader boards in true gamer fashion. So in turn, all of these 'How Will You Survive' videos could be the team just showing us the myriad of challenges we could face in Survivor Mode; not to mention Alien Isolation proper. I guess we'll find out in a few weeks time.