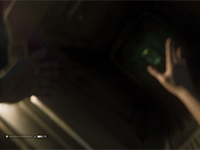 You would think by now that it would be common knowledge not to hide in air vent in Alien Isolation or in any horror situation for that matter. It is a tight fit for most and usually leads to a dead end quickly. They may work wonders for Batman but face it, all but one of you reading this are not Batman. Hiding in air vents when being hunted down is just not a good idea.

To prove that point further, Sega and Creative Assemble have released yet another video in their "How Will You Survive" series for Alien Isolation showing what will happen if you try to use the titular Alien's favorite haunt and hunting shortcuts. As you may have guessed it already, it doesn't end well for the player here and will most likely lead to the same end when we all play Alien Isolation in the coming month.

This video does give us another look at some of the gameplay for Alien Isolation in the mix too although rather limited. I'm kind of hoping that the next video is something along the lines of "Don't Go Swimming" or "Don't Drink While Underage." You know, all of the classic horror movie flubs that we should expect to get us killed in Alien Isolation. Is it maybe a little too much to ask for all the events that are listed out in Scream to get added in the mix? Most likely.

Keep up the fun videos though Sega. This is totally keeping my attention on Alien Isolation as it should be until the launch here on October 7th.