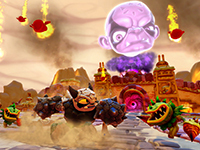 Just in case giving us the ability to use and play as the villains in Skylanders Trap Team wasn't enough, it looks like we are getting yet another mode to play the game in. No longer do we have just a fun little platformer game but now we are looking at a "tower defense" of sorts making its way into the game in the form of the Kaos Doom Challenge. There is something about that word and Kaos that I can't just seem to put my finger on…*

Anyways, this new gameplay mode for Skylanders Trap Team looks to pit players and all of their Skylanders in a 100 wave of "doom" where enemies will be flooding the arena to take you down. Mixed in will be the "Mystery Box of Doom" that will unleash gigantic villains into the mix to ensure your ultimate doom. Depending on your collection of Skylanders toys up until now that could prove rather easy. More so with Skylanders Trap Team as you will also be able to use your trapped villains during this mode as well. So the more you spend the more chances you have to make it to the end with ease.

But you don't have to take just my word on it. Here's what Emperor Kaos has to say about this new mode in Skylanders Trap Team

It should be no mystery that I am looking forward to Skylanders Trap Team and the franchise has been a bit of a guilty pleasure over the years. I do gripe about the cost of all of the toys one would need to be able to full beat any of the titles but that is part of the gimmick. Now it looks like with Skylanders Trap Team they will all add to the actual gameplay of the game and not just give you other fun options. Some kids and adults will need a whole lot of Skylanders to make it through the Kaos Doom Challenge and this will most likely lead to more toys and fun.

Skylanders Trap Team with its newly announced mode will be out on October 5th (NA), October 10th (EU), October 2nd (AU) depending on your region there and will be on the PS3, PS4, Xbox 360, Xbox One, Wii, Wii U, iOS, Kindle Fire, Android, and 3DS. Damn; that is a whole lot of option there.

* Yes, I am fully aware of the Doom Song from Invader Zim. Hence the jokes…