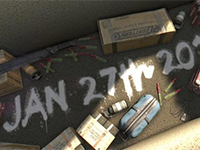 I don't know about you but I was really let down that I wouldn't be able to play Dying Light this October. When it was delayed I could do nothing but question "why?" when the game looked polished enough when I saw it at all the past conventions. None the less it was claimed that Dying Light wasn't going to be hitting the PS3, PS4, Xbox One, Xbox 360, or PC until February of 2015. Such a huge delay and in the mix of all the Resident Evil fun that has already been announced to boot. There is good news in the mix though.

It has just been let loose that Dying Light will not be coming out in February as once though but it will be launching on January 27th 2015. Yep, now we know when we get to "run with the zombies" in Techland and Warner Bros. upcoming title. This was of course all confirmed, and mostly ignored, tweet from the official twitter account for the game yesterday. Maybe it was the weird cryptic post of just the image and date that threw people off? Here, have a look.

So there we have it. Dying Light will be launching at the end of January 2015. Was this too long of a wait for us or do you think that the game will prosper from the delay? Will you even have time to play Dying Light in the mix of all the titles listed to come out at the end of the year and "early 2015"? Sound off like you have a pair in the comments below.