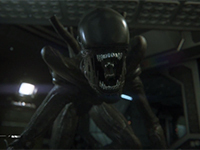 If you've been out of the loop then you may have missed that Sega and Creative Assembly have a nice little video series slowly coming out for Alien Isolation. The idea behind it all is how to survive in the world that the game takes place in. It is also a nice look at how not to play Alien Isolation as the actions taken by the player in these videos seem to always lead to the titular alien hunting them down and doing very bad things to them. This latest trailer is no exemption from the concept.

This new video for the Alien Isolation series shows why guns are not always the solution in the game. No, this isn't some form of gun reform BS here but the fact that the sound will attract the alien to you like zombies in a prison. That a Walking Dead reference for those who may be wondering.

I will say that the way the events that took place before the alien kills the player here look like the bullet to the head of the NPC was needed. Seeing as the alien was hiding nearby though they really should have gone with an ax to the face or some facsimile of an ax. Nice, quiet, and to the point. (Pun intended). Although it doesn't look like we are going to be given that option in Alien Isolation as readily as it would be wanted. Hells, for all we know the same result would have happened given the fact that the NPCs shot first. So we would be fucked from Jump Street here.

All of these videos for Alien Isolation do hit home on the point that we will have to play the game as stealthy as possible if we don't want to see a montage of kill screens as we progress through the game. There does look to be quite a few different animations for us to see, so it might be worth it in the long run. We'll for sure find out this October 7th.