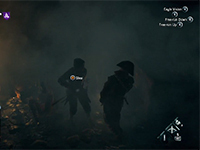 Unlike the game that will no longer be mentioned, Assassin's Creed Unity's heist mode will pit players to traverse areas to attempt to steal some item from said area. Of course it would be too easy if it was just running and jumping so there are also randomly placed guards throughout the level that you will have to deal with. By random I mean that their placements and paths are supposed to be completely different each time you play or replay the specific heist. That and the chests are also randomized so the same path won't work for all of us and thus adding to the replay factor of Assassin's Creed Unity. Or at least the heist missions.

It is interesting to see that there is a focus on co-op kills as well here. That is how it looks at least as the following video shows off that one player needs to take down one enemy and would be 100% detected if the second didn't 'off' the other guard in time. It looks like we will have to all be looking out for good players and friends if we want to master these missions and get away 100% undetected; this of course being another key factor in the missions.

All of the other Assassin's Creed Unity videos have shown off that there isn't really a full need to stay undetected why playing the game but here in heist it affects your overall prize at the end. I'm not sure why that would be in the story sense of things here but that is how you can walk off with your biggest score in the Assassin's Creed Unity heist 'matches'. Can we really call them that? I'm going to do so for now and moving forward.