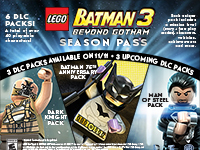 If you are one of those people who think that the 40+ characters isn't enough for LEGO Batman 3: Beyond Gotham then you will be excited to hear that the first three of six DLC packs have been announced. Also in that mix is the availability to get a DLC season pass so you won't have to miss out on any of that extra content. That is as long as you are planning on playing LEGO Batman 3 on the PS4, Xbox One, Xbox 360, PS3, or PC. I guess all of the Nintendo fans are going to be the only ones missing out here.

So what comes in this $14.99 season pass for LEGO Batman 3? Well, here are the first three announcements that will be available when the game launches. The other three will be coming at a later date so let's focus on what we do have just below. That sure is a whole lot of additions to LEGO Batman 3: Beyond Gotham even though this should really be a JLA or All DC Universe title now instead of just Batman but what you going to do right? If you do want to keep it all to just Batman though you do not need to purchase the season pass to enjoy all of these add-ons for LEGO Batman 3. Each pack will also be available for download for $2.99 so you can pick and choose and miss out on $3 savings in the end. That's about what it rounds out to be when you look at it.

I guess we'll all see if LEGO Batman 3: Beyond Gotham will be able to keep everything relevant on November 11th and moving forward. We do need a good Batman game to keep us playing until Batman: Arkham Knight is released right?