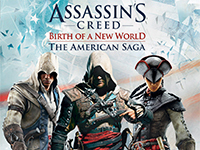 Just in case you didn't think you were going to get enough Assassin's Creed this year with Unity and Rogue launching in November it looks like there is another set of titles coming just weeks before the one-two punch of those titles. All on the PS3, Xbox 360, and PC at that. This new addition to the franchise is Assassin's Creed: Birth Of A New World — The American Saga although it really isn't a fully new addition to the universe but a way to get caught up on all the lore and events leading up to Rogue/Unity.

There has been no word on if all the DLC for the titles will be included in this bundle of Assassin's Creed titles but it makes sense to do so. Then again, we also have no clue how much it will cost to pick up this bundle so if it is dirt cheap for three full titles then Ubisoft may just hold back on all that Assassin's Creed DLC and still require us to piecemeal together all of the content over the games. Doubtful but still possible.