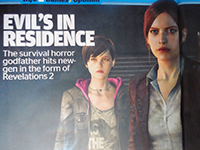 Over the past weekend it looks like there has been a bit more on Resident Evil Revelations 2 revealed via the UK magazine Gamesmaster and UK website Push-Start. It looks like there was and interview that took place with the game's producer (Michiteru Okabe) and a slew of details have surfaced from it. That and a slew of in game shots of Resident Evil Revelations 2 were mixed in and show off both Claire Redfield and Moira Burton (daughter of Barry Burton). The protagonists slated for the game.

Yep, we have two "leads" for Resident Evil Revelations 2 and both are going to be playable via co-op when the game launches in Early 2015. From the sounds of the co-op though it will be more focused on whoever is playing Claire than Moira as Moira has a very supportive role. Granted Resident Evil Revelations 2 won't need to be played in co-op but it is a nice feature for you if you have a friend who loves hopping into horror games just to keep you alive and killing the undead. Well, semi-undead I think.

The enemies for Resident Evil Revelations 2 are not being labeled as the traditional zombie fare here. A new enemy called the Afflicted is going to be peppered into Resident Evil Revelations 2 and they look like normal zombies but are faster and able to kill more efficiently. Further discussion makes the Afflicted sound much like Clickers from The Last Of Us as players are going to have to play and choose if they are going to tackle the enemies head on or try a stealth path to get around or take them out. Interesting as that will add a bit more of the horror back into the franchise that has turned into an action game since Resident Evil 5 and Resident Evil 6.

This of course is the aim according to Okabe though and Resident Evil Revelations 2 takes place in between the events of RE5 and RE6. It looks like the pair have been kidnapped and brought to an "abandoned island detention facility." They of course need to escape and find their way out to join the fray of what is going on in the world as some insanity does happen to take place giving us RE6 after all. Unless we are going to get a shocker and find out how hopeless the world has become and both girls die to explain things. Then again, wishful thinking.

I am excited for Resident Evil Revelations 2 none the less as it does sound to have all the great elements from RE4 with a partner that is actually capable; or at least can be capable if you have a good player helping out. I guess we'll see how the franchise is going to expand and improve to the next gen systems and PCs which hopefully will not lead to the death of the overall franchise. So many hopes and wishes to be dashed for me though…