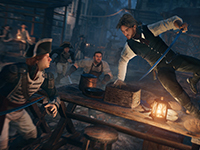 With the delay of Assassin's Creed Unity both of the "next installments" of the Assassin's Creed franchise are slated to release on the same day. The other title being Assassin's Creed Rogue. One for the next gens (PS4, XB1, PC) and the other for the current gen (PS3, Xbox360) respectfully on November 11th 2014. Obviously both of them offering up different mechanics and play-styles to go along with their different titles but which one should we all be clamoring for this coming November? That is if you are all still not glued to the Call Of Duty: Advanced Warfare multiplayer still.

To help us all out with the Assassin's Creed debate here it looks like Ubisoft has been gracious enough to offer up a few new screen shots for both titles to see if Rogue is going to be able to hunt down and kill Unity in the games market. Or for that matter if the multiplayer of Unity is going to trump the new experience of assassinating the assassin's in Rogue. Let's have a look and then let the debate begin.

It is no contest when you look at Assassin's Creed Unity and then compare it to Rogue's graphics which is going to look nicer but is that all we are looking for in our Assassin's Creed titles now? Personally I think that Assassin's Creed Rogue, while still hanging on to last/current gens, has a better concept to add with getting to play as the perceived villains of the entire franchise. Unity does look to have the multiplayer that gamers generally want but mixed into the core game instead of another option doesn't seem like the right path to go.

If I have to choose on November 11th between Assassin's Creed Unity and Assassin's Creed Rogue I think my money is going to find itself going to the rogue's gallery due to the different feel for the overall game. Graphics don't play as big a part in gaming for me and neither does multiplayer but the true interactive experience sells more.

Those are my opinions though so take them as you will. What do you have to say on this? Which Assassin's Creed title looks the best here? Which sounds to have a better experience? Sound off in the comments below and let the small corner of the internet hear your virtual voice.