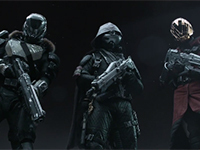 I made the comment earlier that people have been losing their excitement for Destiny as the game's launch date looms even closer. I also claimed that something needed to be done to get the excitement back even after the Planet View site cropped up. Well it would seem that my complaints and wishes were answered as we have a new live action trailer for Destiny now and it does nothing but show off why we should be excited for the game. Even though it is mainly focused on the multiplayer aspect of the game's world.

Just a bit lower on the page we have the latest trailer for Destiny and how the game's events would be played out if we could actually don the armor and take to space taking down those rude aliens. Who has no respect for our history? I mean, come on!

What this new Destiny does seem to do is show off the fun that can be had during the game if we happen to have awesome buddies as shown here. I'm personally at a loss in that department in terms of buddies that will be able to join me in my experience given platform preference but that is a totally different issue. I can see how Destiny would play out just like the events below as I will most likely be making the same jokes even though only I will be able to hear them. I know… I'm lame.

Have a look at the new trailer and hopefully have your excitement revitalized for Destiny now that we are under a week away from the game's launch. September 9th seems to have cropped up so fast here.