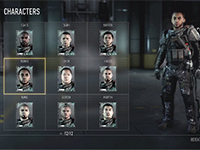 Last month Call Of Duty: Advanced Warfare's multiplayer was shown off to the public during the Gamescom event. Everyone had nothing but amazing things to say about what was shown even though it was only the tip of the iceberg, so to say. Obviously be who we all are we want to see more of the gameplay, modes, customization, and kills coming in the next Call Of Duty. The next bit of wait time is over now as we have a nice long look at the multiplayer just a bit lower down the page.

Let us have a watch and see what else is in store for us with Call Of Duty: Advanced Warfare's multiplayer when the game hits on November 4th.

Well that just made the addition of the exoskeleton system to Call Of Duty: Advanced Warfare that much cooler and hopefully will give a few lesser experienced players a chance to compete at the levels of all those experts out there. I know a lot of people out there are going to bitch that the playing field has just been leveled for new players here but if the multiplayer just stayed stagnant you would be complaining that Call Of Duty: Advanced Warfare is just the same game you "mastered" last year and you know it. Don't lie to yourself there.

Also, did you spy that my likeness was added into the Call Of Duty: Advanced Warfare multiplayer here? If you look closely you can see Hades in the options for the operators. This most likely means my normal call sign will be spammed with hate here as we get closer to launch and well after but I guess it is something I'll have to deal with. Now if only Sledgehammer or Activision would have been in full contact over this we could have made that operator more 'godly'.