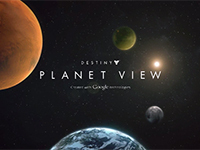 If you think you know all you need to know about Destiny so far then you may want to think again. Even those who managed to grind all the way to the level cap during the beta for Destiny may not know all of the ins and outs of the game's universe. Don't fret if you are one of those completionist types who need to know all the little tidbits though. Just hopefully you are versed in using Google Earth as the latest viral craze for Destiny happens to be something along those lines for all to experience and expand upon the universe just before the game launches next week.

What am I talking about? Well the latest in the marketing campaign for Destiny called Destiny Planet View. The short and dirty version of what Destiny Planet View is all about is picture if someone went out of their way and created a Google Earth mapping for each of the closet planets, Mars and Venus, and the moon. Then they added in all of the mythology and story of Destiny so gamers can get a taste before the full release of the game. That is it in a nut shell but you don't have to take my word for it.

This is an amazing way to get some of the basics out there for Destiny if I do say so. I know I've been hearing a whole lot of chatter about gamers losing their excitement for Destiny as the release date looms closer and if there is anything that should rekindle that it would be a fun interactive way to get fresh tidbits of information about the game. At least it has been for myself as I have been digging and have a blast seeing and hearing everything with the interactive map.

If you want to check it all out then you can go to www.destinyplanetview.com for yourself. If this doesn't get you pumped for Destiny's release on September 9th then you really were not as big a fan of the game as you claimed you were.