Become An Agent Of The Inquisition With The Dragon Age: Inquisition Multiplayer
by David 'Hades' Becker [ Thursday, 28th of August 2014 - 05:00 PM ] 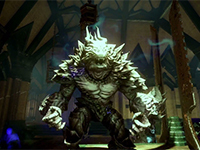 Yea, you read that right; Dragon Age: Inquisition is getting multiplayer mixed into the game. To be honest I am surprised that it took this long to get a multiplayer option into the franchise as it seems like it would be a decent fit. At least that is how I saw it back in the Origins day as the game played a lot like other titles that had a good multiplayer mixed in for the genre. I guess BioWare and EA wanted to make sure the franchise felt different and are just no getting around to adding in a touch of multiplayer.

What I find as a bit odd here though is that from the following trailer dictating how multiplayer will function in Dragon Age: Inquisition you and 3 friends will only be able to play non-story related missions. I could be wrong on this but that is what it looks like and that seems a bit odd. Why not allow players to play through the main story instead of shoe horning in what look like challenge maps or non-required side missions? Wouldn't the mechanics work the same but allow for players to enjoy Dragon Age: Inquisition with friends and family?

The Dragon Age: Inquisition does however let you select between 12 different characters to play through the multiplayer options with and what looks like an extensive customization system for weapons and armor. None of which look like they will move out of the multiplayer realm and into Dragon Age: Inquisition proper but hey; you need to be your own snowflake online right? It just seems odd that it is all 4 player co-op for online missions and not 4 player co-op for story missions too. Maybe that just hasn't been announced yet.

We'll find out here in short time though as Dragon Age: Inquisition is still on par with its November 18th release window for PS4, PS3, XB1, Xbox 360, and Windows. Maybe this is just to gauge the want for a co-op in story mode so we may see it moving forward in the franchise. Dragon Age is a very DnD/Pathfinder like title after all and it would make sense.