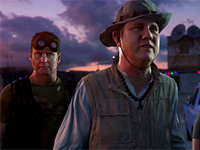 Up until now we have seen mainly the multiplayer aspect of Battlefield Hardline. We even had a nice long beta for the damned thing just after E3 this year. Well it would seem that EA and Visceral decided to show off the single player aspect of Battlefield Hardline at Gamescom this year. Of course this was all done via the PC version of the game so we can expect it to look amazing but any who played the beta know that it looks just about as nice on the consoles. But let's move on from that for now.

If you are a story purist you will most likely want to just stick to reading as there is a bit on that in the gameplay video below. So you don't miss out though I'll touch upon all of the fun little gadgets and goodies that are also shown off in this bit of Battlefield Hardline footage.

We have tasers now to take people down. Not the little shove in the neck kind but the shoot them in the balls kind of tasers. There function of course being a one-hit, non-lethal, takedown to keep all stealthy if you want to. There is also a 'new' scanner that gives you the ability to tag enemies in Battlefield Hardline much like we have seen in the recent Ground Zeroes title.

There is also a new feature, I'll use that loosely, called 'Freeze' where we will get to whip out our cop…badges…and force enemies who perceive themselves as weaker to just plain give up and be arrested. Who knew that in the middle of nowhere a lone cop could still strong arm criminals at their own base to just give up. I find it a bit far-fetched but hey, it lets you stay all 'stealthy' in Battlefield Hardline which will most likely be one of the ways I play the game.

If you are tired of sitting through all of these words then I invite you to dive right into the 12 minutes of gameplay for Battlefield Hardline. You can see all of those awesome new additions in motion as well as get a hint as to how the game's story and character progression will play out. Now if only we had a release date…