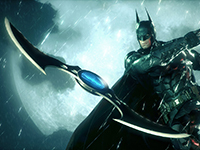 While it may not be more video footage of Batman: Arkham Knight we do have a few new screen shots for the game to tide us over until the next big video of gameplay. Although this looks like it is all about the Batmobile or Batman in full action here in the game. If only there was more to speculate on and think about for Batman: Arkham Knight or the reason it is coming out in February next year instead of October here in short time. But alas, there is nothing more to go with than these images.

That all said, why don't we take this time to discuss Batman: Arkham Knight? Why not throw in a few comments and/or question in the comments below and let the world know how excited you might be for Batman: Arkham Knight. Or for that matter, let the world know how un-excited you may be; if that can really be the case for people out there. Who knows? It very well could be but so far I have yet to meet a single person who has felt that way about the game to date. Don't prove me wrong y'all.

So there. Have a look at the new screen shots for Batman: Arkham Knight and sound off. Hopefully we can keep something going until there is another huge update for the game. Hopefully new villains or a release date is in the chamber for Rocksteady and Warner Bros. Please?