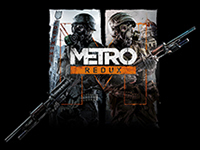 The release of Metro Redux is almost upon us. Just about a week now until fans of the franchise can replay both of the amazing titles that have come out in an all new fashion and on the PS4, Xbox One, or their PC again. Granted we already know that Metro Redux is going to look spectacular and leaps and bounds over the PS4 and XB1 versions of the game but wouldn't it be awesome to see how amazing the games look over the consoles of yesteryear? Look at all that old timey talk.

Back to the future now with Metro Redux.

As I mentioned above we have a few new videos showing off most of the visual and aesthetic updates that have taken place for Metro 2033 and Metro: Last Light. If you want to see how much work 4A Games has put into either title then you should check them out in all of their glory. Obviously, and not because of the console, the 2033 part of Metro Redux looks to have made the largest leap forward now that it is running on the latest engine and at a crisp 60 FPS. That is not to say that Last Light hasn't progressed but it was such an amazing title in the first place that it is hard to see the advancement.

Time to shut it and let you watch these new comparison videos for Metro Redux. Look forward to our full review soon on the mechanics and other features that have been given the upgrade as well.