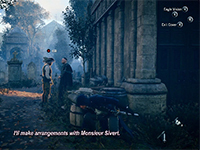 Yea, you read all of that above. It looks like Arno is taking another step towards being Garret or Batman here in Assassin's Creed Unity. Granted that is me just poking fun at the new features for the game when in all seriousness I am pretty stoked that there is some form of change up to the mix for the franchise. Even though it looks lifted from other titles in the form of presentation at this point. Enough on that though, let's dig into what we have from Gamescom for Assassin's Creed Unity.

I gave it some guff but the new stealth features look like they add in a few things to Assassin's Creed Unity that always bugged me about previous titles. Assassins are supposed to be insanely stealthy and it looks like now they are after so many damn iterations of the franchise. I am also digging the new set up for "eagle eye" here where it feels more like a well versed detective than something mystical. Like the jest I made above; being Batman.

Assassin's Creed Unity is set for an October 28th release for the next gen consoles and I could not want time to pass quicker. After seeing these great additions I think I may take back my lack of excitement statements I made in articles past. I'm ready to take on the world as Arno now.