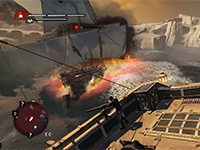 So it looks like Assassin's Creed Rogue is coming out strong at Gamescom here and with its imminent release date approaching the dev team took time to show off the new and improved naval combat system for the game. This was an amazing feature that I thought made its real debut in Assassin's Creed IV: Black Flag but it looks like Ubisoft is just pushing things further by taking us into uncharted waters, pun intended, with different locations that we can sail in. Below you will find both the videos for River Valley and Arctic locations we will get to sail and kill through.

First up here we have the River Valley portion of Assassin's Creed Rogue. Not only do we get to see how the Morrigan handles much better than the Jackdaw but we also get to see one of the missions where Shay has to hunt down and reclaim Assassin owned territory. This also means new weapons and gear to be used here as well as the introduction of a gas mask in Assassin's Creed Rogue to negate poisons in the area as well as Assassin smoke bombs to escape. Also there is a grenade launcher of sorts added to the mix as well as an air/blow gun.

Here have a good watch at some of the new features coming in Assassin's Creed Rogue. I can't wait to assassinate those pesky people hiding in bushes and hay now.

Now that we've seen some of the awesome new 'land' mechanics for Assassin's Creed Rogue let us move into a bit more of the naval stuff and wildlife. The below Arctic location shows off how dynamic the weather and seas can truly be in Assassin's Creed Rogue. I am especially excited for the new ice sheets and glaciers that will plague the ocean ways and require us to upgrade a ship that should have infinite resources. Sounds kind of weird to say that here but sometimes we have to fudge story for gameplay mechanics don't we?

Some of the other cool features that are touched upon here in this arctic gameplay of Assassin's Creed Rogue are that we can now recruit and send ships out like Assassin missions in games past. At least that is the bit of the gist I got when watching and not paying attention to the 20 new sea shanties that have made the mix into Assassin's Creed Rogue. I honestly can't think of that many but now they have added more on top of the ones we've already had the pleasure of hear in Black Flag. Kudos to you Ubisoft.

While I know that Assassin's Creed Unity is the bigger push this coming October I find myself even more excited for Assassin's Creed Rogue to hit on November 11th. Even though it is only for the PS3 and 360, the whole idea of being able to fully play as a Templar through Assassin's Creed Rogue is more appealing than playing with three other people who may not know what to do. I'm ready to go assassin hunting and not assassin partying. Bring it on!