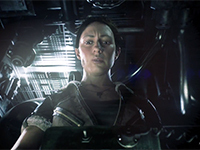 There shouldn't be any mistake in knowing that Alien Isolation is being slated more to the horror and suspense side of the franchise than the pure action schlop we've been getting. I've played through a bit of the game at conventions past and while it is now Silent Hills teaser it is a down right suspenseful title. At least that is the case based on the little bit I have played for Alien Isolation but I am sure that SEGA and Creative Assembly want to instill that fear that the franchise had so long ago.

If you look a bit below, you will see a CGI trailer for Alien Isolation that is supposed to encapsulate how horrifying the game should be when all is said and done. Granted, it is a full video and not gameplay at all so it is a bit hard to judge that unless you can really put yourself in the shoes of Amanda Ripley, the main character. It is a bit hard to do when not actually playing the game but just try with the following CGI trailer and see if you can imagine.

Ok, so this trailer may not have been the best to show off the horror of Alien Isolation but I will say that is only because it is in video form. When we actually get to play the full game here is something to keep in mind; we've seen so little of Alien Isolation in gameplay form we won't know what to expect around each corner. That is what makes for a truly suspenseful and horror filled experience. Humans fear the unknown and will make things up to rationalize or increase the fear. Now think about that…

Don't get me wrong. I would have loved a bit more of the actual gameplay for Alien Isolation here but I get, or at least I think I do, what SEGA and Creative Assembly have done with the marketing for the game. They show too much and the first play through won't be all that horrifying. Show just enough to prove that Alien Isolation is not what we've become accustomed too and they should have a hit as long as they deliver and gamers don't get too scared and have to flock online to see others play the game and show them where the jumps are or how to blast through Alien Isolation and not piss yourself during the process.

I guess we'll all see when Alien Isolation hits the PS3, PS4, Xbox 360, Xbox One, and PC on October 7th this year.